10 Most Expensive (and Exclusive!) N'hoods U.S. 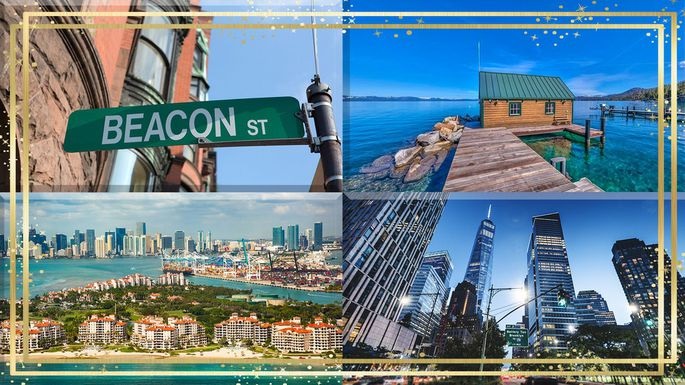 It's the great national good news/bad news joke. The good: Americans are richer today than at any time in this country’s history. The bad: Most of their combined net worth (just over $100 trillion, according to the Federal Reserve) is held by very few. And yet, our nation of haves and have-nots is obsessed with those haves, the lucky folks buying up private jets, six-figure sports cars, eight-figure pieces of art, and one-of-a-kind Wu-Tang Clan LPs. We track their movements with a combination of lust and envy.

And there's one way the ultrarich are just like the rest of us: Their largest spending category tends to be in real estate. After all, nothing says success like a megamansion in an exclusive area—or several! So where are the 0.2% buying homes these days? The data team at realtor.com® set out to find today's most expensive ZIP codes.

Along the way, we found a few surprises. When it comes to luxury neighborhoods, the top dogs are getting challenged by newcomer neighborhoods with even bigger homes or posher condos.

“The ultra-ultrahigh net worth buyer can afford anything. When you can buy anything, it is difficult [making a decision] because that means everything is available,” says Dolly Lenz, a real estate agent who sells high-end properties around the county and founder of Dolly Lenz Real Estate in New York. “In terms of neighborhoods, these people are either going for aspirational places or looking for that next hottest place.”

To find these sought-after bellwether markets, the data team pulled median listing prices for the past 12 months, June 2017 to May 2018, to find the ZIP codes with the highest home prices. We included only ZIP codes with an average of at least 12 listings per month, to make sure the results weren't skewed by a few big-ticket sales. And to give the ranking geographic diversity, we limited it to just two ZIP codes per state, and no more than one ZIP per metropolitan area.

Got it? Check the trust fund, and let's do some window shopping.

Atherton isn't the first place you'd expect to find the most expensive neighborhood in the country. But this Silicon Valley community lined with mansions—a quick Lyft ride from Facebook headquarters and west of Menlo Park—has seen affluent techies drive home prices into the eight figures.

"It’s mostly venture capitalists and very successful high-tech people who are buying here," says Alireza Faghiri, a real estate agent at Alain Pinel Realtors based in Menlo Park. “It’s not gated communities, but there are some very high-profile people living there.”

In Atherton, buyers come for the size. Plenty of single-family homes here stretch beyond 8,000 square feet. (Check out this 11,000-square-foot mansion for $17.8 million.)

It's a predominantly residential community, though, so homeowners typically drive to nearby Palo Alto when they get a hankering for some brown rice sushi or fusion cocktails.

You didn't think we were done with Silicon Valley already, did you? Roughly a 25-minute drive south of Atherton, Los Altos has more of a real town, with some cool eateries. There's less old money and fewer enormous estates here, but plenty of (relatively) understated wealth.

What was once a quiet town with summer cottages has been replaced by modern, tech-friendly mansions. Homes such as this art moderne–style, 7,600-square-foot place are what this neighborhoods looks like these days. Built in 2018, this home costs $10.9 million.

The ZIP code, close to Google's headquarters in Mountain View, is home to co-founder Sergey Brin. The Wall Street Journal reported in 2012 that Brin was bankrolling real estate investment in the Los Altos area, in what the Journal called a "bid to beautify and transform its sleepy downtown." It seems to be working.

And while just about all of Atherton's older homes have been replaced with newer mansions, there are still spots in Los Altos where new development hasn't taken over. For example, there's this 1,600-square-foot home built in 1953—listed at $2.6 million. That's tiny compared to most of the homes on the market here; the biggest one tops 20,000 square feetand is priced at $55 million.

Welcome to the hottest part of Manhattan. This ZIP is dominated by Tribeca (aka Triangle Below Canal Street), the formerly drab warehouse district that has become the ultratrendy home to the Tribeca Film Festival and scores of artists, actors, and all-around rich folk. Actress Jessica Bieland hubby Justin Timberlake spent $20 million on a penthouse with floor-to-ceiling windows here in 2017. This area includes parts of SoHo, Little Italy, and Chinatown.

The housing is a blend of ultraluxe new condos and converted lofts in gorgeous, turn-of-the-century, formerly industrial buildings.

“You can’t build stuff like this anymore," Shemesh says. "It’s not cost-effective.”

The highest end of this market can stretch well into the eight figures. This 8,000-square-foot, four-bed, six-bath loft in SoHo is priced at $65 million. (Wow.)

For new construction, the 10-story building at 325 W. Broadway was built in 2016 and boasts radiant floor heating throughout its apartments, and views of both the Empire State Building and One World Trade Center.

Amazon founder Jeff Bezos surpassed Microsoft's Bill Gates last year to become the planet's richest person. But unfathomable wealth isn't all they have in common: They both live in the waterfront city of Medina, which has become the go-to home for Seattle's elite.

Located on the opposite side of Lake Washington from Seattle, this community is covered in dark evergreen trees and packed with huge, gated mansions. Many of the homes here have docks on the lake and private beaches. So of course you'll also spot some jaw-dropping trophy boats here. The community has homes dating to the '60s as well as homes built this year.

In Medina, you can find this five-bedroom, 9,000-square-foot waterfront home priced at $11.6 million. And it wouldn't be a mansion without an indoor pool, wine cellar, and bespoke billiard room. Right?

Three miles off the mainland of Florida, wealthy home buyers will find Fisher Island, once owned entirely by the Vanderbilt family. Accessible only by boat or helicopter, the island has become a secluded paradise for around 200 households occupying its Spanish-style mansions.

"Fisher Island has a tropical feel, and it is almost like one big park," luxury real estate agent Lenz says. "Homes either have an ocean view or one of the bay and city skyline."

Even condos can easily top $5 million here. This four-bedroom, 4,600-square-foot condo with marble floors and wraparound terrace is listed for a cool $6.9 million.

Among the most common buyers on the island are wealthy Russian businessmen who come here to escape the cold winters back home, Lenz says.

Located on the banks of Lake Tahoe, Glenbrook attracts affluent buyers looking to snag second and year-round homes in gated communities, some with a private beach and golf course. In the 1880s, Glenbrook was a logging area, but by the mid-1990s it had grown into a vacation spot for folks from the San Francisco Bay Area and eventually developed into a high-end, year-round community. Bonus: It's just 50 miles from Reno (aka the Biggest Little City in the World).

"It was typically a summer community for many, many years. The majority of homes are still second homes, but you have many people who are doing their Nevada residency, which is six months and a day, for tax purposes," says Claudia Thompson, a real estate agent at Oliver Luxury Real Estate, a Christie's International Real Estate affiliate in Incline Village, NV. (Nevada has no state income tax.)

And the community has valet service—for your boat.

Former Secretary of State John Kerry owns a 9,000-square-foot, corner townhouse in Beacon Hill, a historic neighborhood in the heart of Boston that has grown into one of America's most prestigious communities. Individual garage parking spaces here can sell for $500,000.

"All the power players live here: doctors, attorneys, guys who work in wealth management and finance," says Collin Bray, a real estate agent at Century 21 Cityside in Boston. "The reason why this neighborhood is so expensive is because Boston is evolving around it. Facebook and GE have offices here, and Reebok just moved their corporate headquarters into the seaport."

Beacon Hill has a mixture of condos and beautiful old brownstones that can run from $10 million to $15 million. This three-bedroom condo in a boutique building that overlooks the State House gardens and Boston Common, a 50-acre park, is listed for $9.4 million. The community is near the Charles River and its esplanade, great for running, biking, and contemplating life.

Cape Cod, the skinny peninsula jutting out from Massachusetts, is where you'll find some of the nation's most famous beach towns, including Hyannis, home to the Kennedy compound, and Provincetown, renowned for its artists, restaurants, and party scene. But the title for priciest homes in the region goes to Woods Hole—a community where spotting a helicopter pad is nothing out of the normal.

The Woods Hole real estate market attracts Bostonians and New Yorkers looking for weekend getaway homes, as well as some of the higher-paid researchers and scientists who work in the area. The region is home to Woods Hole Oceanographic Institution, Marine Biological Laboratory, and National Oceanic Atmospheric Administration's Northeast Fisheries Science Center.

"Homes selling above $10 million will get bought and knocked down to build something bigger," says James Kinchla, a broker at William Raveis Real Estate.

In a region known for its boating and fishing, Kinchla says, buyers are particularly attracted to big, beautiful Colonial homes right on the water, and their own private piers. Take this 6,500-square-foot mansion overlooking the Quissett Harbor. Built in 1900 and including a pool and guesthouse, it's priced at $6.8 million.

Snowmass, located in the Colorado Mountains, is better known as "Old Snowmass" to locals who come here for big ranch-style homes that sit in the woods. The town is about a 20-minute drive to the Snowmass ski resort and a 25-minute drive to the world-famous Aspen ski town. So Old Snowmass buyers get the slopes, but without as many close encounters with tourists.

“It is great for investment [opportunities] and for Colorado living. You have more land, an abundance of wildlife, and a short drive to Aspen,” says Erik Cavarra, managing broker at Engel & Völkers Snowmass. “These buyers are looking for more privacy and more acreage.”

Both Old Snowmass and Aspen have watched real estate prices move north in recent years. Each place has plenty of mansions, but overall prices in Old Snowmass are higher—it lacks Aspen's plethora of small condos that pull down the median prices.

Perhaps no property gives a better representation of Old Snowmass’ real estate market than this four-bedroom, 3,000-square-foot home on 33 acres bisected by Snowmass Creek. The home even has a private bridge over the creek, and goes for a cool $9.5 million.

Jackson Hole is one of the world’s most sought-after ski towns for real estate investment. It has some of the best slopes the U.S. has to offer, a small-town feel, and big-city amenities. But many of the area's biggest and most expensive homes are in Wilson, a village that’s about a 25-minute drive to Jackson Hole.

Homes in Wilson tend to be newer and bigger than homes in many other parts of the Jackson region, with a flurry of development happening since the 1990s. But they still affect an old-fashioned style, including this $5.5 million, four-bedroom, timber-frame home located on the banks of the Snake River.

“Wilson checks all of the boxes for buyers. It's close to everything but not in the hustle and bustle,” says Andrew Ellett, a broker at Engel & Völkers Jackson Hole. “Most of the subdivisions are on or near Snake River. There are lots of wildlife encounters. People see elk, bald eagles, and occasionally a bear.”